A special concern of the Galician Germans continues to be the preservation of their cultural heritage. The Galician German Archives are a unique collection consisting of books, periodicals, pictures, photos, films, sound documents, personal papers etc. Films and other documents, for example, depict or recount journeys to Galicia after 1989, visits to former German settlements and neighboring Ukrainian or Polish villages and meetings between old friends from pre-war times and present-day residents. Another unique collection from archives in Poland and Ukraine, documents the evangelical parish of Lemberg 1778-1939 in the Central Historical Archive in Lemberg (L´viv). A collection of about 100 microfilms also provides the basis for extensive scientific or personal research. As a unique and extensive collection, the Archives offer a platform to support diverse research interests, including the following:

In order to make all these documents easily accessible to a broader public, in 2011, the executive board of the Hilfskomitee decided to place them at the “Archiv der Martin-Opitz-Stiftung” (Archive of the Martin-Opitz-Foundation) in Herne/Westphalia. The Archive is the most important German library of German history and culture in Eastern Europe.

Until the incorporation of the Galician German documents is complete, however, they are available in a restricted manner. 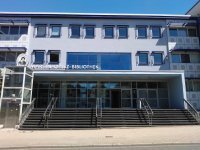