Here is a list of German publications about various topics (in German language only):

Our "Blickpunkt Galizien - Das Heilige Band" -  a new name for our newspaper !

It has connected Galician Germans all over the world. 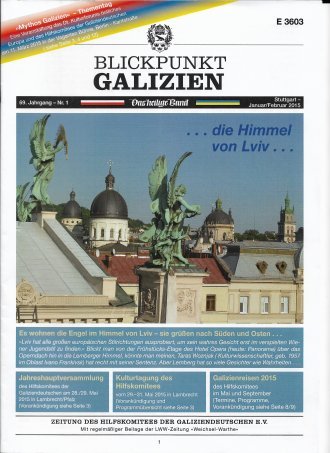 More detailed information about Galicia is available in the "Zeitweiser".

Over the course of its 50-year history, this publication has provided

answers to many questions one may have about Galicia. Thanks to Professor Dr. Erich Müller´s efforts, this compendium continues to chronicle what we know about Galicia, her German settlers and the eventful history of this region.

After it has become more and more obvious, that the return of the 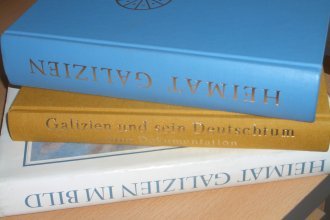 Galician Germans to their former homeland was impossible, their leading representatives decided to record the 150 years of German minority live in Galicia for the sake of their children and grandchildren as well as for the posterity.

Consequently since 1965 six Heimatbücher (homeland almanacs) have been compiled and published by the Hilfskomitee, whereas each volume was assigned to a particular subject matter. Insofar the Heimatbücher are an expression of recollection and remembrance.

If you want to order them, please send us a message.

PAYMENT can be effected using PayPal. All payments should be in Euro.

New on the book market

Galicia - as it always had been. (in German)

The book highlights the fundamental historic events, formative this region before and after the foundation of the village. It describes life, worries and successes of people in Galicia using the example of Roman Catholic Village.